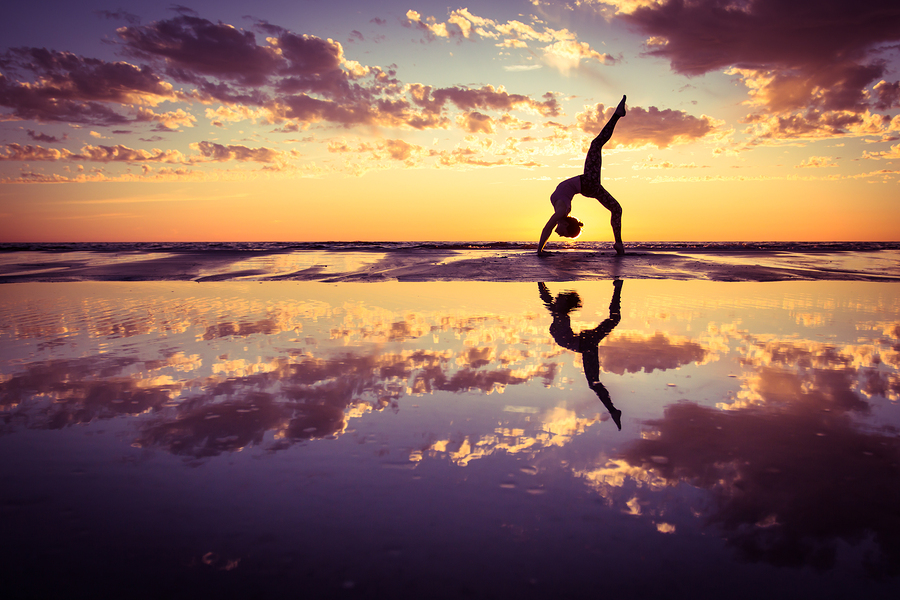 “The body is merely the visibility of the soul, the psyche; and the soul is the psychological experience of the body” —C.G. Jung

“Yoga is most often understood as the union of the individual with the transcendental self, with what Jung terms the Self.” —Judith Mills

In recent years, the practice of yoga has made headlines in the mainstream media as parents in U.S. school districts challenged its inclusion in the curriculum at public schools, insisting it amounts to religious indoctrination and that it violates religious freedom.[1] In the U.S. today, while mainstream yoga is largely focused on physical poses and breath work, historically it evolved over millennia in the context of the spiritual and religious traditions of India. As such, it is not a religion, but rather a philosophy that enables mindfulness and a sense of well-being, among other benefits. No matter where you fall in the debate on whether—and where—it should be taught to children, practitioners of depth psychology and those seeking positive transformation appreciate yoga for its powerful potential to heighten spirituality and increase consciousness.

C.G. Jung, who valued yoga for its evidence-based experiential approach, perceived “important parallels” with psychoanalysis. He made a comprehensive study of yoga, delivering multiple lectures over the course of several years focusing on a psychological interpretation of kundalini yoga. He asserted that as yoga, being the oldest practical philosophy of India, is the mother of psychology and philosophy (which are one and the same thing in India) and therefore the foundation of everything spiritual.[2]

Yoga, meaning union in Sanskrit, seeks to create awakening through somatic experience, cultivating states that connect us more wholly with something larger than our ego selves—the ground of being, the web of life, or what Jung termed the “Self”—effecting a transmutation of consciousness that stems from attention to inner experience. The experiential, embodied practice puts us in touch with our physical being and grounds us more fully in the earth, anchoring us to something immutable, even as our breath and movement serve to make us more consciously aware and to shift inherent patterns and blocks we may be experiencing.

“Yoga teachers are well aware of how the practice of yoga brings awareness through the layers of the body, often dredging up previous traumas and somatic awakenings,” notes Cheri Clampett, who is a certified yoga therapist with over 25 years of teaching experience, and the co-author of The Therapeutic Yoga Kit. “When these two complimentary fields come together, they offer deep avenues of healing for the soma and psyche.”

What are those avenues of healing, exactly? While yoga serves to balance and unite opposing forces to create a harmonious being, Jung went as far as to describe the intersection between depth psychology and yoga as the capacity for liberation, for each to lead to a “detachment of consciousness…a freeing from the passions and from the entanglement with the realm of objects…a psychical experience, which in practice is expressed as a feeling of deliverance.”[3]

Practitioners have long reported the capacity for yoga to evoke the numinous, a term Jung borrowed from psychologist Rudolf Otto to describe something beyond the ordinary; inexpressible or mysterious—something spiritual or sacred that carries us past the ego experience of the everyday self and reveals our divine belonging, our wholeness in potentia.[4] Indeed, yoga has been known to lead to the awakening of Kundalini, a force described as primordial energy, Shakti or universal power, which can be constellated a combination of ritual spiritual and somatic practices. When its ascent culminates in the topmost chakra in a “blissful union of Shiva and Shakti,” it leads to a “far-reaching transformation of the personality.”[5]

For Jung the Kundalini is the anima, or “soul“. “From the standpoint of the gods, this world is less than child’s play; it is a seed in the earth, a mere potentiality,” Jung wrote. “Our whole world of consciousness is only a seed of the future. And when you succeed in the awakening of Kundalini, so that she beings to move out of her mere potentiality, you necessarily start a world which is a world of eternity, totally different from our world.”[6]

Jung believed that yoga originated as a “natural process of introversion,” and that such introversions characteristically lead to personality changes. While Jung viewed these inner processes that evolved from yoga as universal, he felt the methods that led to them were culturally specific.[7] For this reason, Jung discouraged westerners, whose core beliefs are founded on a perception of separation—of dual and opposing poles in the realms of mind and matter, nature and psyche— from practicing yoga, fearing it could lead westerners into territory they were not culturally prepared to encounter. He suggested the west would develop its own “yoga” to explain or engage the unconscious in due time, ideas now being debated in the field of Jungian psychology.

Indeed, yoga, like many eastern or mystical spiritual traditions, is rooted in the idea of non-duality; that is, that all creation, including humans, is an aspect of the divine and is not separate from it. While this kind of transcendent consciousness is potentially available to each of us at any given moment, our ego-identity often stands in the way of that sense of unity. Yoga, in part through enabling us to engage our bodies and to be more in the present moment, allows us to suspend the thoughts, ideas, concerns, and conditioning that typically stand in the way of our sense of the sacred.

Jung makes a compelling description of the kind of transcendence one might experience in awakening to these kind of psychological or spiritual truths. On the subject of freeing ourselves from outer and inner entanglements, Jung wrote that “consciousness is at the same time empty and not empty. . . . no longer preoccupied with compulsive intentions but turns into contemplative vision.”[8]

Lionel Corbett, M.D., Jungian analyst and author of Psyche and the Sacred, writes about this apparent dissolution of boundaries, noting that “innumerable people have been able to …have numinous experiences of union with the larger psyche. In such moments,” Corbett suggests, “the world and the personal self seem to flow into each other, both part of a greater unity, with no sense of separation or personal unity…. In such an experience, the personal self is lost in the larger Consciousness of the Self, revealing our essential continuity with it.”[9]

Corbett points out that Jung, in many of his writings, displays a spiritual sensibility that is compatible with the great non-dual spiritual traditions, even while remaining dualistic in his thinking in other of his works. Both these approaches are valuable to psychotherapy, Corbett insists, yet most Jungian therapists ignore Jung’s non-dual thinking. Corbett intends to expand on some of the important implications of non-duality for psychotherapy at the Yoga Meets Depth Psychology program offered by Pacifica Graduate Institute in July 2016.

Another Jungian analyst contemplating the value of the interface between yoga and psychotherapy is Dr. Joseph Cambray, who proposes that Jung’s incorporation of yoga practices and principles in his version of depth psychology started largely with the Red Book in which Jung documented his exploration of his unconscious and his active imagination encounters with various images and figures during that time. In fact, Jung revealed that during this intense period of confrontation with the unconscious, he frequently turned to yoga to eliminate powerful, wrought up emotions that had been stirred up.[10]

The correspondence between yoga and depth psychology emerged in subsequent theorizing that included references to the yogic literature, points out Cambray, including Jung’s Kundalini seminars in which Jung endeavored a western symbolic analysis of the Chakra system. As a long time psychotherapist (and past President of the International Association for Analytical Psychology), Cambray asserts that the interface of these two approaches provides profound advantages for contemporary psychotherapy. 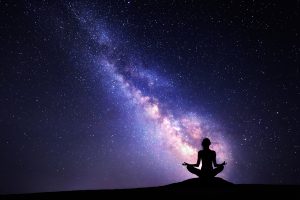 Mindfulness is another powerful tool for accessing states of unity and flow according to Dr. Patricia Katsky, psychotherapist and Vice-Provost at Pacifica Graduate Institute who, in conjunction with Dr. Juliet Rohde-Brown, Director of Clinical Training for the doctoral program in clinical psychology at Pacifica, and long-time Buddhist meditation teacher, is exploring the critical characteristics of the mind states that are common to the three fields of yoga, depth psychology, and Buddhist meditation.

Similarly, the two clinicians are inquiring into the implications of “deep play”—a mind state comparable at an adult level to the meaningful childhood play of our past. “Deep play experiences are capable of bringing us into healing contact with the numinous,” writes Katsky. Indeed, in Memories, Dreams, Reflections, Jung recounted his own experience of how the act of play created a powerful psychic state in his own life. After spontaneously recalling a childhood memory of play, Jung felt compelled him to take it up again as an adult. Each day, before his patients arrived, Jung succumbed to the urge to “play,” mindfully building a “small town” of stones. For him, it released a “stream of fantasies” and led to an inner certainty that it was helping him to discover his own inner myth. “In the course of this activity my thoughts clarified, and I was able to grasp the fantasies whose presence in myself I dimly felt,” he wrote.[11]. Jung is also known to have written

In psychotherapy, Katsky proposes that the therapist mind state of “evenly-hovering attention” is one form of deep play, and submits that the practice of yoga can bring one to similar inner states of release and nourishment, leading us to rich self-reflections, creativity, greater contact with the imaginational world, and to deepened consciousness, including numinous experience.

Ultimately, yoga, like many of the world’s wisdom traditions, can become a portal to the present moment, to being anchored in our bodies and on the earth through the embodied use of breath and movement. This, in turn, may give rise to a dissolution of boundaries, enabling us to feel more relaxed, connected, and unified with a larger ground of reality—even ultimately awakening us to numinous experiences of the sacred. Depth psychology, with its emphasis on engaging the unconscious in order to achieve greater wholeness, can lead us to similar states.

“At the intersection of yoga and depth psychology lies the threshold where psyche meets soma,” asserts David Odorisio, a depth practitioner who has created a professional practice that integrates the spiritual heritage of the world’s wisdom traditions with Jungian and depth psychologies in an accessible and embodied way. “This mysterious meeting point between soul and body holds unlimited—and often untapped— archetypal wisdom, vitality, healing, and wholeness.”

Join these and other world-renowned scholars and practitioners July 15-17, 2016, for Yoga Meets Depth Psychology: Embodying the Sacred, Encountering the Soul, an experiential, transformational weekend immersion at Pacifica Graduate Institute in Santa Barbara, CA. Pacifica faculty, including expert-level Jungian analysts and depth psychologists, will present alongside internationally recognized yoga teachers to highlight and illuminate the rich intersections of these diverse yet complementary fields. Details and registration here

The Psychology of Kundalini Yoga: Notes of the Seminar Given in 1932 by C. G. Jung, edited by Sonu Shamdasani. Princeton University Press, 1996

Psyche and the Sacred: Spirituality Beyond Religion by Lionel Corbett. Spring Journal, 2007.

[5] Sonu Shamdasani, in his introduction to Jung’s The Psychology of Kundalini Yoga, p. xxv

[7] Sonu Shamdasani, in his introduction to Jung’s The Psychology of Kundalini Yoga

[9] Psyche and the Sacred: Spirituality Beyond Religion by Lionel Corbett. Spring Journal, 2007, p. 25

[10] Sonu Shamdasani, in his introduction to Jung’s The Psychology of Kundalini Yoga, p. xxv