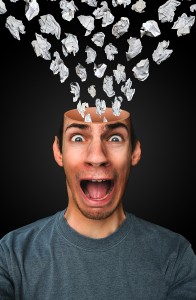 American psychiatrist Robert J. Lifton identifies our very human tendency to ignore difficult realities and overwrite them with thoughts and beliefs that are more palatable as “psychic numbing.” This allows our ego to distract itself enough that it doesn’t have to engage with inner and outer voices and images and movements that go beyond the mainstream consciousness (in Shulman-Lorenz & Watkins, Toward Psychologies of Liberation).

When we witness instances of ecocide (ecological suicide) in the world around us, take note of how wasteful and damaging our consumer-oriented culture has become, or are faced with dire news about how climate change is devastating our planet and threatening life as we know it, we are affected in both body and psyche.

Aspects of the psyche which we require to be healthy and whole get displaced at seeing the destruction; they split off and take cover in a sense, because it’s easier than admitting and knowing we each have some part it in it. This creates a condition of what some indigenous cultures regard as “soul loss,” a sort of psycho-spiritual deficit, which leaves us individually (and collectively) in a state of depression, malaise, and a general loss of vitality. In fact, in Modern Man in Search of Soul, Jung (1933) diagnosed our entire culture as suffering from loss of soul.

In his essay, “The Viable Human,” (in Deep Ecology for the Twenty-first Century, Shambhala), theologist Thomas Berry wrote, “Our present dilemma is the consequence of a disturbed psychic situation, a mental imbalance, an emotional insensitivity.” Ecocide and our contribution to climate change make it nearly impossible to feel “at home” on our planet in today’s world. Many of us are consciously or unconsciously experiencing anxiety at the destruction we’re inflicting on the earth. 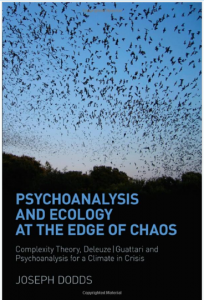 In his excellent and comprehensive book, Psychoanalysis and Ecology at the Edge of Chaos: Complexity Theory, Deleuze|Guattari and Psychoanalysis for a Climate in Crisis offers an interesting look at some humorous ways comedians and others engage us in the environmental debate, in the end, he notes many of us turn to denial because the possible outcomes are so grim and so vastly unknown that we just can’t wrap our brains (or our emotions) around the issues.

Dodds writes, “It seems that we have evolved to deal optimally with threats which are immediate, clear, visible, with simple causation, caused by a clearly identifiable ‘enemy’, and with obvious direct personal consequences,”(p. 46) subsequently pointing out that climate change is highly uncertain, not readily visible, and rather abstract in relation to the “here and now.” This translates to the mass denial, apathy, and dissociation we are currently witnessing overall. Dodds calls it the “ultimate bystander effect.”

Globalization, and especially the pervasiveness of media and the manner in which information is conveyed, amplifies the symptoms, affecting us even more deeply, both somatically and psychologically. The speed at which we exchange and take in information is also a significant problem for the psyche, allowing little or no time for reflection and contemplation of what we hear, see, or read.

Much of my current research on the topic of ecocide, environmental degradation, climate change, and their effects on the human psyche consist of newspaper and magazine articles providing the latest information and statistics on the symptoms of a pattern I am referring to as “Culture Collapse Disorder.”

Due to the speed and fragmentation of mass media, I struggle to articulate and convey information in a way that is considerate of the deep wounds to soul at work in this amazing and frightening phenomena of witnessing the collapse of life as we know it. 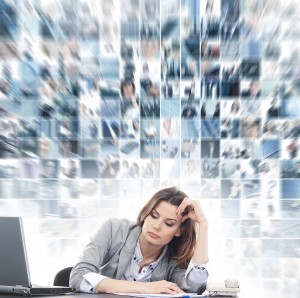 News today in general is difficult to sift through, and does a poor job of conveying what is important. So-called “news” is often delivered at such speed, and with so little time between stories as newscasters, newspapers, or websites skip from one to the next, that we as a public have no time to reflect on any given story.

Too, stories are placed in conjunction with one another with no context of what is deeply important. Recently, I watched PBS Newshour spend nearly ten minutes talking about what it means that many western cultures default to assigning “pink” to girls and “blue” to boys, arguing that it limits girls in their capacity to grow up and become leaders, only to see that in the next segment, which lasted less than a minute, they “touched on” the topic of the 200 school girls in Nigeria that had been kidnapped to be sold into marriage by terrorists. While I don’t contend that the “pink and blue” debate relating to gender issues is important–it certainly beats the Kardashians reality show which was just a few channels over–the way each topic is portrayed in conjunction with the next, distorting the significance of each, confuses the human mind regarding status and urgency of each situation.

I recall noting during the early days of the 2011 tsunami disaster in Japan, headlines on the Yahoo home page read “Japan Faces Nuclear Crisis,” positioned right next to a section entitled “Trending Right Now” which included information on “The Bachelorette,” “Lady Gaga,” and “Oil Prices.” Stories on Yahoo about Charlie Sheen acting out uncontrollably received more overall hits than the Japan disaster did during that time, and we can witness this kind of cognitive dissidence online in a myriad of ways virtually every single day.

Back in Psychoanalysis and Ecology at the Edge of Chaos, Dodds succinctly and convincingly portrays how media serves to skew our comprehension of the real imperative but also reflects our ambivalence, citing examples of how articles for climate change appearing in newspapers are placed side by side with ads for holiday airfares or for SUVs.

Today’s incredibly fast pace of information dissemination via Internet and social media allows us to access important news and data about ecological destruction and climate change, but when treating all topics with equal intensity (everything seems to be “breaking news” on CNN these days), we quickly lose sight of the context that makes meaning.

A recent comic sketch on the HBO news-satire program, Last Week Tonight with John Oliver illustrates this concept visually and forcefully. Oliver explains that, while 97% of climate scientists concur that climate change is a reality and that humans have a part in it, we normally only see television debates in which both sides of the argument are represented equally–as if the debate were fifty-fifty, for and against.

In the sketch, Oliver points out that in order to portray the issue realistically, the debate would have to be between just three climate change deniers and 97 individuals who believe. The point that the debate is 97 to 3, rather than fifty/fifty, is driven home when Oliver sets up a mock debate and proceeds to march out three people on one side of the table and dozens on the other. (Click the video below)

Online, virtually everywhere, stories about celebrities and their public lives line up alongside stories about the destruction of the planet, about atrocities, violence and trauma, as if all were equal in importance and scope. Debates occur without context or proper weighting for us to reflect on what is real and meaningful. It makes me wonder how we, both individually and as a culture, can truly begin to understand what is truly critical and meaningful to spend our time and resources on, when we haven’t properly reflected about what’s going on on our planet and in our culture.

Reflection, and taking the time to allow things to emerge from the margins where they have been banished, or to well up from where they have been suppressed, is a fundamental practice of depth psychology which enables us to have profound insights. What if we collectively set aside a few minutes each day simply to unplug, turn off the news and sit in quiet contemplation, allowing our psyche to truly absorb and reflect the challenges we face? How might that kind of quiet activism begin to initiate change, first in ourselves–and then in the world around us?

NOTE: If you’re interested in the topic of soul loss, you can read more about it in my essay, The Shamanic Perspective: Where Jungian Thought and Archetypal Shamanism Converge.